The government admitted in the Lok Sabha on Monday that a whopping 2.15 crore jobs had been lost in the tourism sector due to Covid-19.

Responding to further questions on the impact of the pandemic on tourism in the Lower House today, Union Culture and Tourism Minister G Kishan Reddy said: “During the first phase of Covid-19, 1.45 crore jobs were lost, in the second phase 52 lakh jobs were lost and in the third wave, 18 lakh jobs were lost.

This brings the cumulative job loss in the sector to 2.15 crore. The minister, responding to the question raised by Sirsa BJP MP Sunita Duggal, said foreign tourist arrivals fell by 93.3% during the first wave of Covid; 79.5% in the second wave and 64.3% in the third wave. The Minister quoted a National Council

of the Applied Economic Research study to say that the tourism sector had suffered huge job losses and added that “job losses have occurred all over the world”.

Before the pandemic, 3.48 million jobs depended on tourism, but those numbers have dropped, Reddy said. 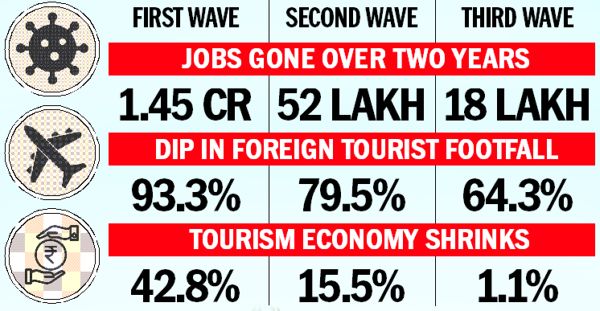 “That is why the government is working to promote domestic tourism, diverting outbound tourists to domestic tourism trips. It aims to incentivize industries that contribute most to the tourism economy and provide tax benefits, subsidies and revenue to industry players. The tourism division belongs to the states, not the Center,” added Reddy, describing tourism as the most affected by Covid.

The minister said the sector was regaining strength with the expansion of the Covid vaccination campaign, with India accounting for 10% of doses administered globally. “From March 27, international flights will also reopen,” he said, crediting NDA policies for improving India’s ranking in the Global Tourism Index from 52 in 2014 to 34 today. today.

The minister informed the Lok Sabha that an interest-free loan of Rs 10 lakh was being given to travel and tourism operators and up to Rs 1 lakh to tour guides to help the sector.

The government has asked Parliament to approve net additional expenditure of over Rs 1.07 lakh crore, including about Rs 15,000 crore for fertilizer subsidy, for the current financial year.

The Rs1.42-lakh-crore budget for J&K was passed by the Lok Sabha amid opposition uproar. It was introduced by Finance Minister Nirmala Sitharaman.