Hello Kashmir: The Valley is experiencing a tourism boom : The Tribune India

Bobby F. Lopez May 15, 2022 Connecticut tourism Comments Off on Hello Kashmir: The Valley is experiencing a tourism boom : The Tribune India 20 Views

LONG queues of tourists at Srinagar airport, crowded restaurants, families waiting their turn at Dal Lake shikara boarding points, couples posing in traditional dress at Nishat Bagh, bustling markets, fully occupied hotels – Kashmir is back in the big league of tourism, with a bang. Last month, the valley welcomed nearly 2.8 lakh tourists, the highest in April for three decades, officials said, who expect the rush to continue throughout the year. The first week of May alone saw an influx of 33,000 tourists.

Even last year, when the whole country was under strict Covid restrictions, Kashmir continued to receive tourists, mainly young people, who had received the vaccine or were open to mandatory quarantine before going travel to their destinations – for trekking and other adventure tourism trips. “The adventure tourism boost has sent positive word across India and we have followed it up with an aggressive promotional campaign,” said deputy director of tourism, Ahsanul Haq.

Official data reveals that 6.6 lakh tourists visited Kashmir last year, bringing the hospitality industry back to life after it remained closed following the repeal of Section 370 in August 2019 , followed by the pandemic. Tourist attendance for 2020 was just 41,000.

All of Kashmir’s top hotels are booked through June and Gondola, Asia’s largest and highest cable car in Gulmarg ski resort, through May 18.

Officials attribute the tourism boom to effective management of Covid, aggressive campaigns across India and support from tour and travel agencies in the country.

In pre-Covid times, Kerala was ahead of Kashmir by a mile as the top tourist destination in India. The pandemic devastated tourism in the coastal state, and it did not recover until late December 2021, providing a window for the J&K administration to attract tourists to the valley.

Assurance was given of Covid protection, packages were incentivized and most attractive of all offers was the opening of restricted or closed tourist destinations.

Major Bollywood production houses and filmmakers have been asked to rekindle their ties with Jammu and Kashmir. In September, the authorities also launched a film policy aimed at providing a one-stop mechanism for film shooting, listing various incentives for producers. A generous provision was a special grant of half the production cost for any film based on J&K or Rs 5 crore, whichever is less.

Likewise, an exhaustive subsidy provision for TV shows, web series, original shows on the OTT platform, and documentary films to be shot in J&K has been specified in the policy. Films based on patriotic, child development and women’s development themes have also been awarded grants of up to Rs 50 lakh.

“It was a well thought out plan to reach tourism stakeholders across India before the country opens up post Covid. We went to almost every major city to seek support from stakeholders,” says Haq.

Some tourists say they have barely heard bad news about Covid’s handling in Kashmir and for others the repeal of Section 370 has instilled confidence.

Visiting Kashmir after 40 years, MV Nair, a retired bureaucrat from Kerala, said earlier he felt it was a risky and hostile place. “That fear is gone. I have found Kashmir to be a safe tourist destination and I pray that it will move towards permanent peace,” he adds. During his week-long stay, he remembers meeting a local family who offered him lunch. “They invited us to their house and we had an amazing wazwan there. Can you see this happening anywhere else in India?” Nair asks. A lot has changed, he says, “but the infrastructure needs to be improved”. 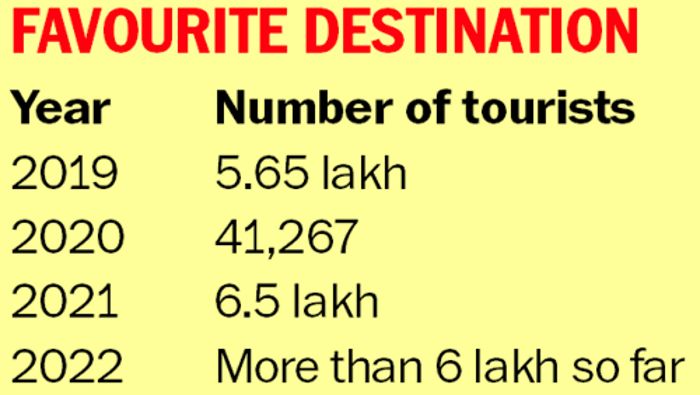 Nitin Ahuja, 50, a healthcare worker from Connecticut in the US, had come to visit his mother in New Delhi last month but the heatwave forced him to plan a solo trek to Pahalgam in the south of Kashmir. “I had heard of violence, of bombings, but things have changed a lot on the ground.”

Given the affluence and tourist interest, 75 new destinations have been opened to diversify the choice of tourists. This claim is backed up by numbers as thousands of tourists flock to Bungus, Lolab and Gurez in North Kashmir and Dodipathri in central Kashmir’s Budgam district.

Young girls can even be seen in groups camping in Bungus and Gurez, reflecting the improved security situation in the region.

Smita Pujari, 42, from Mumbai, came to Kashmir for the first time after visiting her friends in winter. “They gave great feedback and we booked our tickets online.” His group went to Gurez and Bungus. “We fell in love with the place. Gurez and Bungus have breathtaking beauty and serene surroundings. It’s an out of this world feeling,” she says.

The pick-up in economic activity has been a boon for many, but local tour operators are upset as there are no hotel rooms available until June, which has driven prices up around 200%. “Online travel sites have blocked all rooms in top hotels. Our agents in different cities are looking for rooms and we are unable to help,” says tour operator Sajad Ahmad.

“We all suffer from unethical excessive prices in hotels, non-availability of rooms and the link between local hoteliers and online travel agencies. The government must regulate fares, otherwise it will seriously harm us in the future,” says United Tourism Forum spokesperson Farooq Kathu. Non-local travel agencies and online companies have seized 90% of inventory, it claims, leading to hotel rooms being blocked until June 20.

With Kashmir raising the tag of an insecure tourist destination, the next challenge is Amarnath yatra safe passage. More than eight lakh pilgrims are expected for the annual pilgrimage to the southern Himalayan holy shrine in Kashmir, starting June 30.

A senior military official said authorities are keeping their fingers crossed that a single incident can derail all the hard work that has been done to make Kashmir a safe tourist destination.

As former Chief Minister Omar Abdullah said, reacting to the murder of a Kashmiri Pandit employee in Budgam, “Tourism is not normal, it is a barometer of economic activity. Normalcy is the absence of fear.

On August 15 last year, authorities hoisted a 100ft tall tricolor to the top of the 19th century Hari Parbat fort built under the Durrani Empire, with CRPF personnel to secure it. As it attracts the attention of thousands of tourists, the fort reflects Kashmir’s centuries-old tradition of religious tolerance as it is surrounded by a temple, mosque and gurdwara.

“I like the national flag the most flying high. It is a sign of integration, a testimony that peace and normality have returned to Kashmir,” says Mahesh Chauhan, 49, a tourist from Mumbai. Fascinated by the beauty of the Valley, he wants to send his relatives to the region. Inshallah!