It focuses on major watercolors by American artists painted in Spain, Portugal, and Latin America, in dialogue with decorative art objects from the HSM&L collections of the actual places and monuments depicted in the watercolors.

The exhibition will include a suite of contemporary watercolors by California artist Timothy J. Clark (b. 1951), best known for his large works.

“Travel has unfortunately been rare in recent years,” says Guillaume Kientz, director and CEO of HSM&L. “While we may not always be able to travel physically, art is a fantastic way to transport ourselves to another world, providing an instant portal to distant places.

“The artists in this exhibition offer visitors access to many different regions, and they were all influenced by Sorolla, having discovered the Hispanic world through his works in the permanent collections of HSM&L.”

Sorolla was a Spanish painter, who excelled in painting portraits, landscapes and monumental works on social and historical themes.

The exhibition presents 94 works, 83 of which come from the permanent collection of HSM&L, including a work by Clark. 11 additional works exhibited by Clark come from various collections. 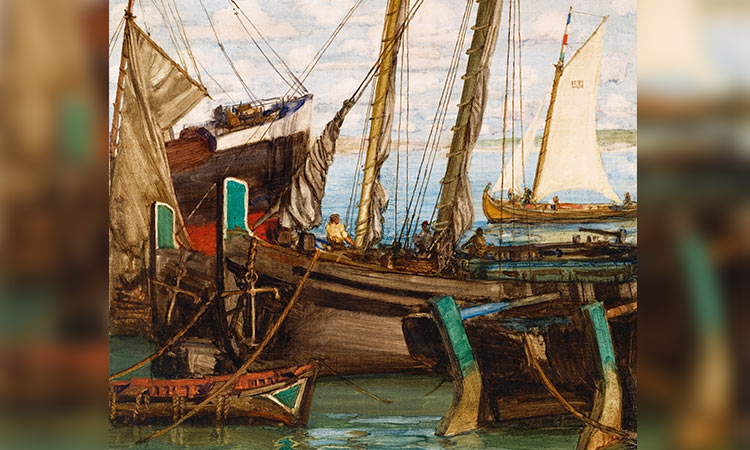 Since the days of Washington Irving, Spain has fascinated American writers and visual artists. For example, John Singer Sargent painted at the Museo Nacional del Prado in Madrid and Granada.

“This exhibition idea is the result of my study of Childe Hassam’s works in our collection and the realization of the role that Hassam’s visit to the 1909 Sorolla exhibition at the Hispanic Society played in his decision to return to Spain in 1910,” says Marcus. B. Burke, Ph.D., Senior Curator, Emeritus in the Museum Department of HSM&L.

Orlando Hernandez-Ying, Goldschmidt & Rockefeller Curatorial and Conservation Fellow at HSM&L says, “This exhibition embodies the perspective of American artists underpinned by Archer Huntington’s intellectual curiosity and fascination with Spain and its culture in an effort to to preserve its memory of history. the shocks of modernity and industrialization. Huntington was an American scholar, philanthropist and collector, and founder of HSM&L.

The first works visitors will encounter in the exhibition will be the paintings of Hassam (1859 – 1935), who visited Sorolla’s exhibition of paintings in 1909 and was inspired to go to Spain.

His paintings of Spain in 1910 were exhibited in New York in the spring of 1911. Other Americans followed suit, such as George Wharton Edwards (1859 – 1950), the Connecticut-born artist and art director of Collier’s Magazine, whose work is also on display. at the start of the show.

The exhibition continues with additional works by Edwards, as well as those by Florence Vincent Robinson (1874 – 1937), the Boston watercolourist active throughout Europe, and Clark, focusing on the watercolors of the three artists of the Alhambra in Granada, Andalusia, Spain.

This section of the exhibition is enriched with decorative arts objects from the Alhambra region. Continuing along the exhibition, visitors will find works of oil sketch panels in display cases by Hassam and Max Kuehne (1880-1968), the German-born New York artist, active in Granada and in the regions of Old Castile (Salamanca, Burgos and Segovia), 1914-23. Works from Daniel Zuloaga’s ceramic workshop in Segovia will also be exhibited.

The next area of ​​the exhibition features works that highlight other regions of Spain, including Old Castile and Toledo. Among the pieces in this section are works by Milan Petrovic (1893-1978) – an American artist of Serbian origin who made watercolors in Spain and Morocco (1927) – including a representation of the tower of the cathedral of Toledo .

As the exhibition continues, the artwork begins to feature areas west of Toledo all the way to Extremadura and southern Old Castile (Talavera, Escorial, Plasencia, Avila) , with pieces by Ernest Clifford Peixotto (1869-1940), the California-born artist, author, muralist, and military and arts education administrator of Sephardic Portuguese descent.

Other regions of Spain highlighted in the exhibition include Seville and Andalusia (Cordoba and Ubeda), Valencia and Portgual, with various works by Peixotto, Clark and Orville Houghton Peets (1884 – 1968), the artist and illustrator born in Cleveland and later active in Delaware. , which was commissioned by Archer Huntington to paint in Spain and Portugal, 1919 – 1921.

An additional segment of works painted in Morocco includes a suite of watercolors by Petrovic. Finally, the exhibition ends with a gallery dedicated solely to Clark, presenting his various works supplemented by decorative art objects related to the subject and the place represented in the paintings of the artist.

The HSM&L is the leading institution and reference library dedicated solely to the preservation, study, understanding, exhibition and enjoyment of the art and cultures of Portuguese and Spanish speaking countries and communities.

WESTPORT — Just in time for the Halloween season, the Westport Museum of History and …